I hope to articulate an inchoate intuition in this post: we are experiencing a return to medieval times – if we ever left them at all.

hu·man·ismˈ[(h)yo͞oməˌnizəm/]: Philosophical and ethical stance that emphasizes the value and agency of human beings, individually and collectively, and affirms their ability to improve their lives through the use of reason and ingenuity as opposed to submitting blindly to tradition and authority or sinking into cruelty and brutality (Wikipedia).

Humanism stresses commonality over difference as a lifeline to preserve basic human dignity. Its principles have always been jeopardized by fear, ignorance, and votes. Death penalty is a long-standing example. But post 9/11 counterterrorism tactics have ushered an era of constitutional pathology, whereby preemptive panic has wilted commitments to human rights, and, by extension, to humanity. Suspicion looms over racialized Muslim men in intractable ways. Overcoming it is by and large a losing game, reminiscent of the catch-22 facing women accused of witchcraft in medieval times. Drowning is never far away for individuals swimming in the shark-infested waters of bias-based suspicion.

From John Yoo’s torture memos to targeted killing, constructed fears of imminent threats justify cutting corners when it comes to neutralizing these modern witches. The hunt for terrorists lead to an archipelago of secret detention sites and to the use of enhanced interrogation techniques, including waterboarding. As Senator Feinstein observed in an op-ed: “[waterboarding] dates to the Spanish Inquisition and has been a favorite of dictators through the ages, including Pol Pot and the regime in Burma”. In fairness, the Assad regime also resorts to medieval ordeals such as the flying carpet. Crucially, these techniques yield unreliable information, quelling our fear but coming short of actionable facts to disrupt or neutralize terror threats.

The counterterrorism interrogation techniques alluded to above are the more visible aspects of the Dark Ages revival. But the differential treatment of African Americans in the justice system also deprecates humanism’s legacy. The healing light of enlightenment never reached the dark corners of deeply entrenched racism.

And then there are alternative facts. Donald Trump’s counselor Kellyanne Conway took obscurantism to new heights with her ignorance-fuelling demagogy preventing evidence-based debate. What appears to be a deliberate effort to circumvent fact-based discussion is akin to medieval-era belief-based authority to govern. Superstition is back with a vengeance, with biases channeled in convenient narratives that bypass rational scrutiny. Fear replaces facts. Without them, debate becomes futile.

A CEO makes 380 times the income of average employee. The latter has to work about a month to earn what CEO makes in 1 hour. The extent of this rift evokes the concentration of wealth in medieval times, with peasants forced to turn a significant part of their yield to their overlord. Occupy’s 99% slogan denounces the abyss between the new lords and peasants.

Zeroing-in on labour, precarious medieval work conditions reoccur in emerging forms of self-employment. Medieval serfs were bound to the land without meaningful bargaining power over the terms of the arrangement allowing them a portion of the profit from cultivating land. Similarly, the freelance economy limits rather increases our agency. Online brokerage platforms to lease (wo)manpower such as Mechanical Turks do not afford meaningful opportunities to negotiate the terms of the work arrangements. While it may seem like an improvement over ties to one employer, it may just be that freelancers in the new economy are tied to the middlemen platforms by virtue of their precarious, unpredictable income streams. These platforms divert a significant amount of the value via transaction fees, leaving the worker with a fraction of her work’s value. In good old Marxian terms, the worker no longer owns the means of production. On closer examination, the promise of freedom underpinning the new economy reveals a precarity reminiscent of medieval dynamics, insofar as it limits end-user’s meaningful choices. What’s more, on-demand work bypasses safety net regimes. Exonerated from social security contributions, the employer-turned-contractor no longer participates in collective insurance regimes protecting worker injuries, externalizing costs to freelancers. Circumventing labour and social security regulation, the gig economy thus neuters the gains of 20th century labour movements.

Grim as this portrait is, it wouldn’t be complete without a nod to resistance 2.0. Neo-servitude opposition is bold, multifaceted and clever. Anecdotal examples include portable insurance regimes, universal basic income proposals, and online platforms such as Turkopticon, a rating tool for on-demand workers. Nodding to Foucault’s Panopticon, this initiative affords micro-workers the opportunity to rate employers, thus regaining agency in the process.

At first blush, freelancing appears empowering. While that may be true for highly specialized individuals, it may also entail a diminishing degree of protection and choice. More than we would like to admit, freelancers might be vassals to intermediaries and work providers.

Current conflicts challenge uniform territorial control as typically exerted by modern nation-states. A case in point is Daech (a.k.a ISIS/ISIL) controlling strategic lines rather than uniform territory. Its pattern of influence evokes blood vessels: enemy lines have become enemy corridors. Considering that the group appears more interested in linking ad hoc strategic points than permanently controlling large static areas, the Islamic ‘State’ is a misnomer. On-demand superiority, if you will. 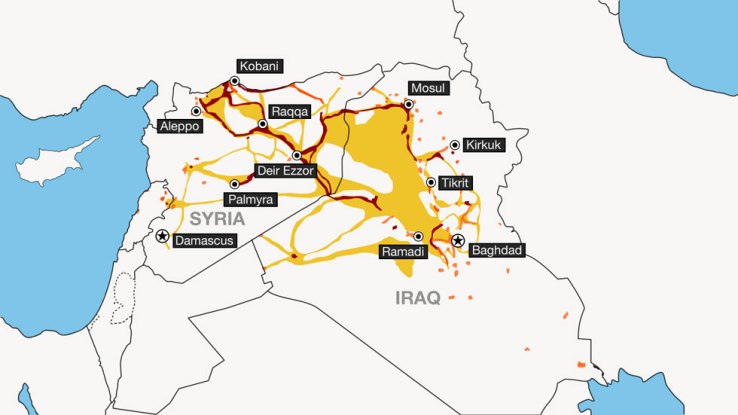 Daech-controlled territory (Institute for the study of war, 2015)

Transient land control might not come as a surprise  considering the nomadic culture that coexisted with settled populations before colonial powers imposed artificial borders in the region. Perhaps the current situation is just a snapshot, an interim step towards full territorial control whereby new non-state actors such as Daech merely replace current nations. However, the plethora of militias, rebel groups and armies disrupting each other makes such an outcome unlikely in the foreseeable future. Even when a group regains control of an area, opposing forces simply go dormant, blending in the civilian population waiting for more auspicious circumstances. In that sense, fractured is the new normal.

From feral cities to warlordism, the rules of the modern nation-state game seem played out. And not just in the Middle East. In 2006, Foreign affairs published an article about gangs controlling Rio’s Favelas and Kingston’s rough neighborhoods. While this exoticizing portrayal might simplistically ignore the agency of local populations, it’s on to something. In many parts of the world, private groups run basic infrastructure and social safety nets – all the while pushing their own agenda. A case in point is the Muslim brotherhood, providing social assistance to Egypt’s impoverished communities. Meanwhile, resourceful individuals check out of the social contract, retracting to gated communities or privatizing their survival through prepper culture.

The collapsing predictability of geo-political power does not escape the vigilance of the U.S. army, as it tries to anticipate challenges to global stability. Its Strategic Studies Institute notes that “global politics are now characterized by fragmented political authority, overlapping jurisdictions, no-go zones, identity politics, and contested property rights”. This superimposition of formal and informal sources of power may pulverize states into constellations of transient turfs, as volatile as stock value.

Like fractals, the medieval resurgence occurs at all scales, macro and micro. Two loosely tied propositions at the microbial level support this argument.

Due to their overuse, some bacteria strains have become resistant to antibiotic drugs[1]. Methicillin-resistant staphylococcus aureus, otherwise known as MRSA, is a superbug infection with a 20-50% mortality rate. The cure? A medieval recipe including garlic, onions and honey.

The Black Plague decimating Europe in the 1350s was a blind equalizer, impervious to social standing. But what about contemporary epidemics? Differential access to vaccines and antibiotics distribute the outcome on a spectrum reflecting wealth inequalities. One can speculate about two humanities, the first inoculated with the benefits of modern medicine, and the latter left to blunt evolutionary pressure.

Pulling these two threads together, a loose connection surfaces. Modern medicine affords short-term gains, but eventually microbes adapt and resistance catches up. To some extent, this setback sends us to medieval times, looking for pre-antibiotics solutions. Those who survive modern diseases without access to modern medicine reap the long-lasting evolutionary benefits, built in their DNA. These radically different paths to overcoming disease might create a biological rift in the commonality of humankind. There’s also a third possibility: generic engineering, or how the haves may reap the benefit of hard-earned immunity by the have-nots.

Neo-medievalism affects systems at all scales. From modern witch hunts against presumed terrorists to freelancers unable to negotiate on-demand work gigs, and potentially our genetic make-up, a resurgence of differential dynamics complicates the equation. The commonality of these trends is precisely the lack thereof: a resurgence of the anecdotal. Idiosyncratic warlords, injured workers left to their own devices or genetic mutations destabilize systematic, uniform and universal assumptions. Left and right lack a lingua franca to dialog, polarized and trapped in mutually exclusive closed-circuit ideology. Adapting to this new (dis)order might mean we need to defrag our worldview, paying closer attention to polyphonic murmurs as we try to imagine what lies ahead.