Somewhere along the frustration that comes with the tribulations of jamming and rehearsing, fellow band members nicknamed her Little Dragon. The band eventually adopted the name for its first single. With a third album coming out this summer, Little Dragon has been steadily growing and might have to change its name to Not So Little Dragon. I spoke with Yukimi Nagano, signer / percussionist of Little Dragon, after their performance at Sónar festival in Barcelona. 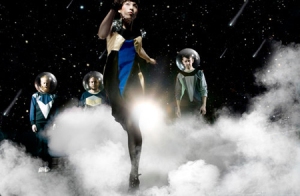 M : Tell me about your beginnings

Y: I first met Erik (drums) and Fredrick (bass) when I was 14. They were two years older than me; I remember thinking they were real cool. They asked me to play with them and I felt so honored that older guys would come to me. Then we became good friends and played music together, that’s how we spent our time. Erik listened to a lot of hip hop at the time. Then I met Håkan (keyboard) a few years later and he brought a different sound. He was into Kraftwerk-like synth music and Jean Michel Jarre, bringing a new electronic perspective to the group. We lived in a collective that was also our studio, where we’ve written all our music. Håkan had a simple keyboard-computer setup, and as soon as we had money we bought more equipment. Finally we moved out but kept the place as our studio. The guys rebuilt the space, it’s very homemade. It’s a bit of a junkyard but it’s our home, our bubble.

We had all these songs, and two friends owning Off the Wall records released « Test » and « Forever » on a limited-edition 7″ vinyl. It became Rough Trade of the week and created a little buzz. This was unbelievable for us! We couldn’t believe that someone was into what we were doing. Then we signed with Peacefrog and started touring slowly. At first the label was very optimistic, but then it was realizing that – as many indie record labels– records sales is tough. So we didn’t have a lot of financial support and it was a bit difficult. We did everything ourselves.

M : Do you still live together now?

M : You passed that step?

Y : Yes. We spend so much time together that it’s important to have a little bit of breath when we come home.

M : Have you ever considered singing in Swedish?

Y : No. It’s kind of Swedish culture not to sing in Swedish.

M : I can definitely see the evolution from the eponym first album (2007) to « Machine Dreams » (2009). What about the upcoming album « Ritual Union »? Is it a break from your past music? Is in in continuity? What can we expect?

Y : It is in continuity but different. Some songs are more poppy. And maybe more direct, but still psychedelic in their own way. Other songs are very dreamy, or dancy. We’ve always had a wide spectrum of influences.

M : You said elsewhere that during live shows you don’t work with any pre-recording, to control your tempo and allow some improv. Listening to the show today, some songs were very different that the recorded version. Was this your Sónar special dancy edition or is every show such a departure from the album version?

Y: We love electronic, house, techno music so it was fun to mix it up today. It’s harder to do that in a venue show where people expect to hear the songs.

M: So you went a bit crazy today?

Y: A little bit. With some shows you feel more mechanical, with others you feel the energy, the space, the crowd. Today I felt inspired from the very first song. Håkan did something on the keyboards I didn’t recognize. It’s small different details that inspire you. Every now and then you have those shows where you just change stuff. Today was one of those. It was a good boost for all of us.

M : Does the process ever work in reverse, meaning you take your jamming on stage back to the studio?

Y : We thought about recording live shows. But when we’re home we mostly feel like doing something fresh, completely new. But definitely you can get inspired from live show, like playing a house track, or making something more uptempo… Both « Machine Dreams » and the upcoming album are inspired by that. Even if we love ballads, we want to put something else on the album, because it’s boring live.

M : I am intrigued by the lyrics of « Never Never ». Do you want to share what you were thinking about when writing the song?

Y : We’ve always struggled to pay the bills from just playing music, and were very determined not to work with anything else. A few years ago, Eric and I were playing backup vocals and percussions with José González. He was blowing up at the time, and I found myself really uninspired just being the backup singer. The song is about dealing with your own demonic thoughts, about feeling like someone else has everything, and you got nothing. Sometimes I’m more ambiguous in my lyrics, but this is one of those songs where I was like to hell, this is what I feel.

M : Little Dragon, the Seal colony, Peacefrog… What’s up with all the animal names surrounding you?

Y : Actually Eric and I are always making fun of the fact that there so many animal names these days : Grizzly Bear, Animal Collective… the list is endless. The Seal Colony was a collective space, people were unemployed, laying on the sofa on their sides like seals. So the name stayed.

M : Which show is most memorable?

Y : Coachella last year was a big moment. We did our own show and guested on the main stage with Gorillaz. Unexpected shows and places can be fantastic. In Mexico we played to a wide spectrum in the audience, from  grandmas to children. Nobody had heard of us but it ended up being a great show.

M :Tell me about the cover of the next album. Are those all family pictures?

Y :Yes. My dad and I put it together.

M : Does he play a big role in your music?

Y : He’s very eager to be involved, he’s doing a video for the upcoming album. He has a very strong work ethic, very Japanese. He’s going for his passion, for what he loves to do. That has inspired me a lot.